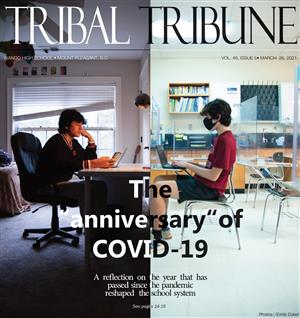 Wando's Tribal Tribune has once again been nominated for a Pacemaker award from the National Student Press Association.

Last year's February and March issues were evaluated and selected as finalists from a pool of almost 150 publications from 31 states, as well as D.C., South Korea, and the United Kingdom.

“The Pacemaker is the association’s preeminent award,” Executive Director Laura Widmer said. “NSPA is honored to recognize the best of the best.”

The NSPA Pacemaker award has a rich tradition and the association started presenting the award to high school newspapers a few years after the organization was founded in 1921. Throughout the years, yearbooks, magazines, online sites and broadcast programs were added to the competition.

Of the 65 newspapers, newsmagazines and specialty magazines recognized as finalists, 28 will earn Pacemakers. The winners will be announced on November 13 at the virtual conference.