Sylvia Weeks was rounding out her senior year at the former Bonds Wilson High School and had yet to be approached by a teacher or a guidance counselor about attending college or figuring out a career path. The thought had never occurred to her that college was an option. She was being raised by her grandparents who had just enough money to get by. 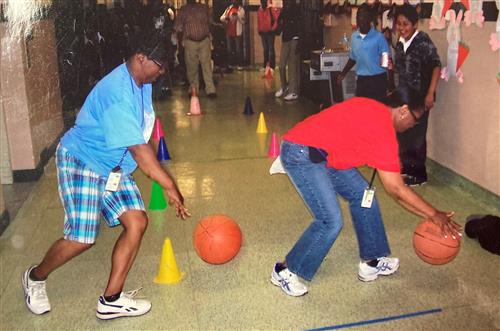 “They always provided, but there was nothing extra,” said Weeks.

Weeks was a talented athlete who played basketball, volleyball, and ran track.  She had just been a part of a state championship relay team. She was also a member of the National Honor Society. She caught the eye of many of her teachers. So when she went back to campus to visit, everyone was glad to see her. One teacher, in particular, John Fitzgerald asked where she would be attending college in the fall. She explained to him that college wasn’t an option because she did not have the money. Fitzgerald wasn’t accepting that as an answer and within one week, he had an acceptance letter and grants covering the cost for Weeks to attend the College of Charleston (CofC).

Both of Weeks’ grandparents only had an elementary school education, and they were a little leery of her choice. However, they supported her decision and were excited for her.

Weeks graduated from CofC in four years and landed her first physical education instructor position at C.E. Williams Middle School in 1985. In her 36-year career, she has chosen to teach in District 4 schools because she wanted to give back to the very community that was there for her all those years ago. 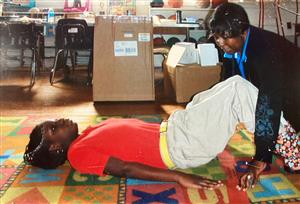 Early in her career, Weeks was offered a part-time job at Murray-LaSaine Elementary School by the longtime principal, Blondell Kidd. As happy as she was for the opportunity, she had to humbly ask to be let out of her contract when a position in North Charleston became available. Kidd was gracious enough to grant the request so Weeks could become a traveling PE teacher in four different schools per week.

Then Weeks received the news of her lifetime. The longtime PE teacher at Chicora was leaving. She was offered the job and spent 25 years there before coming to NCES three years ago.

“As principal of Chicora Elementary, I was fortunate to have Sylvia Weeks as the PE teacher in our school,” said Mary Reynolds. “She was always willing to go the extra mile for her students and their parents. Her performance as a PE teacher was outstanding!” 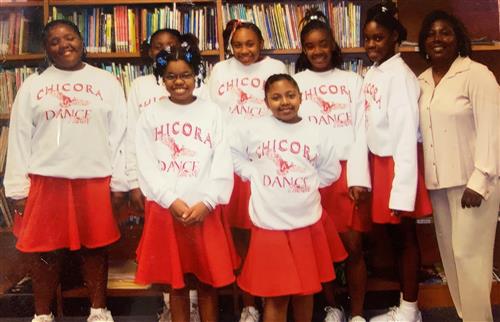 “She worked tirelessly,” said Reynolds. “She provided extracurricular activities for the students, but as an incentive, they had to work hard on their academics to participate. She always wanted the best for each and every one of them.”

Weeks carried that philosophy with her to NCES. 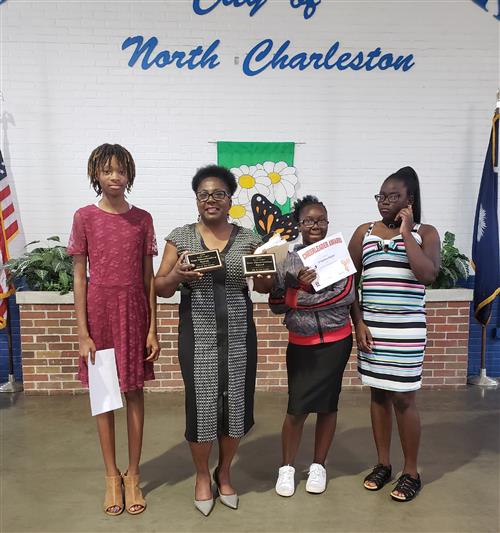 While at Chicora, Weeks developed and few programs not normally found at the elementary school level. From basketball, to track, to cheerleading, to dance, there was a physical activity program for everyone. Those same programs have been established at NCES. The pandemic put some of those activities on hold but Weeks is looking to come back stronger than ever next school year.

Weeks has served as the PTA liaison and grade level chair, chaired numerous committees, worked with parents to host a fifth-grade prom, and collaborated with other teachers in the planning of the graduation ceremony and other celebrations for students. She works with the dance team so that they can host performances several times a year for the parents and the larger school community. Her latest effort is organizing a talent show.

“Our kids need this kind of stuff,” said Weeks. “I’ve been there. I’ve been one of these students where the parents don’t have a lot of money for the extras. If we can provide the extras here at school, at no cost, then it opens up their eyes to the possibilities in life.”

The dance team practices at lunch, after school and at home. Weeks emails videos of choreography to the parents so the students can practice over the weekend as well.

“I just believe that all these opportunities should be available to our students,” said Weeks. “If someone has to do it, then why not me? I love my job. I would do this for free.”

Fundraising is what makes most of her offerings possible. Her colleague Tyra Johnson is her partner in most of the events hosted by or for the school. But, she also depends on the special area team.

“Mrs. Weeks is a hard worker and dedicated to her craft as a wife, mother, PE teacher, and awesome four-time Teacher of The Year at North Charleston Elementary School and Chicora Elementary School,” said Johnson. “I am super proud of my Soror of Delta Sigma Theta Sorority Inc. for her service to the students and families she has served for 30 plus years. Her heart is big and her work is amazing.”

With some of the money, Weeks has raised, she has been able to order jerseys and matching sneakers for her basketball team. She has paid for uniforms for the dance team and the cheerleading squads. She has taken the basketball team to other schools in the area to watch older players compete. It is Weeks’ way of showing them the difference between organized basketball and streetball. She has taken it a step further and brought in seasoned coaches to conduct Saturday clinics for the basketball teams.

Pre-pandemic, Weeks was able to host a formal, catered banquet for students involved in extracurricular activities and their families, all for free. This banquet recognized athletes, the dance team, and the robotics team. She brought in keynote speakers such as Justin Beaufort, Executive Director of ABFF, Kendra Logan, author and owner of Ardnek Success Consulting, and Military Magnet Academy’s state title-winning coach, Danny Taylor.

“I wanted to host something nice so parents could celebrate their children and watch them receive their trophies for a job well-done,” said Weeks.

Weeks said that her drive to provide the extras for her students and their families comes from the influence of teachers like Fitzgerald who pushed her to excel and reached out to help when it was needed.

“It’s my chance to do something for someone else,” said Weeks. “I’m not perfect but I give it my all. I just love it. I keep telling my husband I may retire soon. He disagrees because he doesn’t believe that I wouldn’t know what to do with myself.”

When Weeks isn’t coaching or teaching, she and Johnson are thinking up new ways to host fundraisers or bring something new to the NCES family. Last year, they  hosted a paint night where families painted on canvas under the instruction of a professional. They called it “Painting with a Purpose.”

With the help of her husband, Kevin who is a Charleston Fire Department (CFD) Battalion Chief, she is able to work in partnership with the CFD to meet the needs of a number of her students and families. For years, Kevin has worked with his department to coordinate Fire Engines for Families and Heroes vs. Heroes in which the fire department competes against the police department and most recently NCES parents and staff in a basketball game. Entry to these events was a toy. The toys that were collected were then distributed to the families at Chicora and NCES.

In addition, CFD has mentored, hosted drives, hosted dinners, made monetary donations, and provided station field trips to the school. Weeks’ husband also works with IBFF to support the school.

“When I was hired, I told them that my family comes as a package,” said Weeks. “In addition to all of my husband’s help, my three grown children have helped with coaching and volunteering whenever and however I needed. My extended family members have served as caterers, speakers, judges, and photographers for the prom. It’s a true family effort.”

“Mrs. Weeks walks the walk,” said NCES Principal Mellissa Brubaker. “She does not seek attention or accolades, but humbly serves her community. Everything she does is for the benefit of students and she is continually looking for ways to provide experiences and access for our students.”

Weeks loves working in the North Area and is now teaching a third generation of children.

“I tell them that if I didn’t teach your momma or daddy, I know someone in your family,” said Weeks. “The D4 community is close-knit and it hasn’t changed much since I was a young Liberty Hill girl; it is still a very loving community.  It has been a blessing for me to provide opportunities to these young folks and help them the way my teachers helped me.”

After 36 years of PE instruction, Weeks is also appreciative of how the curriculum has progressed.

“It is so much more fun and free-flowing,” said Weeks. “It is not as rigid and skill-driven, and more focused on fun and enjoyment. Grades are based on participation not athletic ability. Doing your best and a willingness to work at accomplishing a skill is what’s important.”

That’s all Weeks asks of her students.

Moreover, PE is now geared toward laying the groundwork for healthy habits that will benefit students in the future.

“Like my teachers did for me, I hope I can do the same for my students,” said Weeks. “Trying new things opens up doors and possibilities for a brighter tomorrow.”