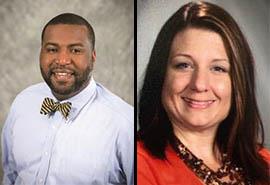 Charleston County School District (CCSD) is proud and excited to announce the leaders for the newly merged middle school serving all District 10 (West Ashley area) students in grades six through eight. Kevin Smith has been selected as lead principal and Maite Porter as principal of the new C.E. Williams Middle School. The school will open on its new campus at 3090 Sanders Road in August 2020. Kevin Smith is currently serving as the principal of C.E. Williams and Maite Porter is currently serving as the principal of West Ashley Middle.

Prior to joining C.E. Williams in 2012, Smith was an assistant principal at Charleston County School of the Arts and Morningside Middle in North Charleston. While at Morningside, Smith served as the site director for the school’s Making Middle-Grade Work initiative, oversaw the school’s implementation of PBIS, served as a member of the Riley Award-winning school improvement council, and helped re-establish the school’s parent-teacher association (PTA). He was also a member of the 2010-2011 Principals for Tomorrow cohort during this time. Smith began his career in the district in 2001 as a visual arts teacher at Brentwood Middle School where he served as a related-arts department chairperson, created a male mentoring club, and served as the school’s yearbook advisor. Before coming to CCSD, Smith was a district executive for Boy Scouts of America overseeing fundraising and recruitment activities for his district, as well as building partnerships and securing opportunities to increase scouting in underserved communities.

Porter came to the district from Volusia County Schools where she has served as the principal of Louise S. McInnis Elementary from 2016 to 2019. Prior to her time at McInnis, Porter served as a principal intern at Silver Sands Middle School for three years, assistant principal at Heritage Middle for five years, and dean of students of Pine Ridge High for two years.

Throughout her roles, Porter has managed and led schools of 500+ students and 50 faculty and staff; successfully reduced out-of-school and in-school suspensions by thirty percent using restorative practices, discipline with dignity, and peer mediation; developed intervention initiatives to reduce referrals by ten percent; designed and facilitated professional development using Kagan Strategies for faculty; initiated and implemented school-wide house systems based on the Ron Clark Academy Model; developed data-driven school goals for School Improvement Plans and more. Before taking on administrative roles, Porter was an English teacher at Pine Ridge high and a third through fifth-grade special education teacher at Bonner Elementary.

Both Smith and Porter are dedicated, outstanding public educators who have attained many notable achievements during their respective careers.

Smith holds a Bachelor of Arts in Visual Arts from Winthrop University and a Master of Education in Educational Leadership from The Citadel.

Porter holds a Bachelor of Science in Exceptional Student Education and a Master of Education in Educational Leadership from the University of Central Florida. For more information contact the Office of Strategy and Communications at (843) 937-6303. ###