It wasn’t until Carla Ferrette-Clark turned 21 years old that she realized there was more to life than the one she living. She was a high school dropout, a mother of three children, and going down a path that likely wouldn’t end well.

Ferrette-Clark was raised on Radcliff Street by her grandmother Virginia. She has a story that most would be reluctant to publicly share. Her story, however, motivates and drives her to make sure that the students she teachers at Military Magnet Academy (MMA) in Charleston County School District (CCSD) are college and career-ready. 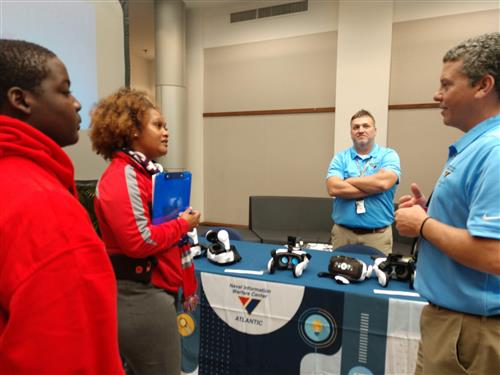 “To do that, I focus on so much more than the academics,” said Ferrette-Clark. “Those hard skills are important but so are the soft skills. It’s a big world out there and my students need to be ready for any obstacle life throws at them. Touching people and impacting lives is bigger than the grade.”

“My grandmother was also able to provide for our basic needs but overlooked my struggles in school both academically and socially because she was working to support us and busy raising the family,” said Ferrette-Clark. “It was not intentional.”

“I went into high school as a single mother,” said Ferrette-Clark. “Then my infant son died in a house fire. My whole life changed. I was young and confused and began making bad choices. I felt so alone and I dropped out of high school, which didn’t make me feel any better.” 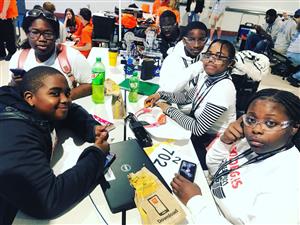 Ferrette-Clark continued to struggle internally, even though her family showered her with unconditional love. She needed more than their love. She needed the support of a community, which in a perfect world, would have been her school community.

“At the time I had three sons (Jessie, Ziare, and Cameron),” said Ferrette-Clark.  When I turned 21 years-old I finally said to myself, ‘my life can’t be like this anymore’. I earned my GED and began taking Trident Technical College courses. I didn’t feel challenged, or satisfied. So I joined the Air Force Reserves.”

Ferette-Clark knew she had to make a decision.

“I wanted more for our lives,” Ferrette said. “I was gone for several months and the boys went with their father. It was the best thing I could have done for myself. I learned so much and met so many people. Most importantly, I learned that I was much smarter than I thought I was.” 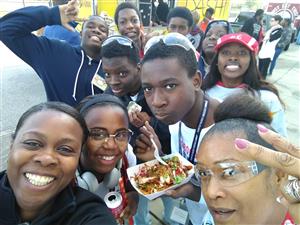 Ferrette-Clark credits her Christianity and her faith for opening doors for her. She went on to graduate from Charleston Southern University with a Bachelor’s degree in Business Management.

“I told my sister that I didn’t want to stop there,” said Ferrette-Clark. “I wanted to continue to experience learning and growing. She told me not to stop so I earned my Master’s Degree in Human Service with a minor in Juvenile Criminal Justice from Liberty University.”

Ferrette-Clark was driven to work in a career that could support her community and help people find resources that would allow them to bounce back; just like she did.

“You can fall, but you can’t stay down,” said Ferrette-Clark.

Her call to help others led her to also work in Youth Ministry. A friend who also volunteered happened to be a guidance counselor with CCSD and suggested that if Ferrette-Clark wanted to expand her gift of serving others that she complete PACE (Program of Alternative Certification for Educators) and become a teacher.

“I researched it and was worried I didn’t have the time or the energy,” said Ferrette-Clark. “I stepped out on faith and chose to do it because I wanted to positively impact the lives of others.”

Ferrette-Clark was hired as a Tactical Officer at MMA to teach leadership, excellence in all things, and service above self. She now teaches technology, cyber security, and robotics. She explained that the structure and core values taught at MMA make teaching so much easier.

“I was nervous about it but reminded myself that I already had the technological skills from being a Knowledge Operator in the reserves and Systems Administrator Contractor,” said Ferrette-Clark. “I believed that if God brought me to it, he would give me all I need.”

At the beginning of that year she was also assigned to serve as the Robotics Team Coach. Ferrette-Clark met a parent volunteer, Sally Anne Archie who would become her mentor and best friend.

“She motivated me to be my best and really show up for these students,” said Ferrette-Clark. “With her help I have built a very successful program.”

“So many big companies are moving to South Carolina,” said Ferrette-Clark. “Technology is evolving daily. We’re not even using our devices to full capacity. There is so much you can learn about technology and I get excited to teach these scholars about this.”

Ferrette-Clark is personally drawn to technology because of her curiousness about how things work, and she shares that with her students. Her class motto is “As long as you’re living, you’re learning.”

“Our brains are set up to take in more than we know,” said Ferrette-Clark. “With that in mind I teach explorative learning so that students work in teams to figure, and problem solve.”

She explained that teamwork and synergy are part of those soft skills that are so important in the real world. Delegating, problem solving, collaboration are all part of productive teamwork, she explained.

“Differences in personality don’t matter when it comes down to a job that must be done,” said Ferrette-Clark. “The bottom line is that when a project must be done, and must be done well, differences must be set aside. That’s what we’re learning in my courses.”

Ferrette-Clark said that the students are what gives her life. She serves students in several capacities to include as a board member of a local charter school. She and her husband Gregory also own their own business called G & C Incorporated Logistics Company. On top of all of that, she is a grandmother.

“God has been good to me, even by throwing me those curve balls,” said Ferrette-Clark. “Kids need help and encouragement so I am an open book and I share my story so that I can help others. We’re a family here. The children all have various stories and the kids come from different cultures so they’re exposed to different things from their own peers.”

Ferrette-Clark explained that the administration at MMA want to see teachers succeed and provide them with ample opportunities to learn new things. Assistant principal Kiera Gibson has been a mentor to Ferrette-Clark modeling a work ethic that Ferrette-Clark said is unmatched.

Ferrette-Clark will retire from the Air Force Reserves on March 6, 2021. She will return to the classroom to receive her Master’s in Education in STEM from The Citadel.

“It will help me be a better teacher for my students,” said Ferrette-Clark. “You can’t lead if you’re not showing which way to go. They have to see it. It is better to be a good Sergeant than to be a poor General. I’d rather lead from the ranks.”