The COVID-19 pandemic posed many challenges for educators and thinking outside of the box became the new normal. Creativity seemed to be the go-to method for teaching certain curriculum.

At Laurel Hill Primary School, music teacher Kelly Boardman wanted to present their school project to families. With in-person performances postponed for the year, Boardman had to determine a way to show off her student’s hard work.

Boardman settled on a silent film titled “The Book of You-nique” that stars Principal Ashley Dorsey and Assistant Principal Jason Simms. Each grade level played a significant role in producing the film, choosing actions, sounds and rhythms to tell the story and appearing in it.

It will premiere June 9, 2021 with an in-school private showing and June 10, 2021 for families to watch at home via YouTube and Facebook.

“The students had creative control of the movie from writing the script to writing the music,” said Boardman. “It allowed them to express themselves and make something they could look back on with pride.”

Dorsey explained that arts education is so important for the development of young students.

“In the primary grades, it is essential to expose children to arts as we focus on developing the whole child,” said Dorsey. “Three years ago, we had our first school wide musical program where all students participated in singing songs from Broadway shows. With the restrictions of COVID, we wanted a way for our students to showcase their musical talents. Ms. Boardman's creativity led to the creation of the silent film and we are so impressed with the work of our students with her guidance.”

Boardman said that COVID-19 was a blessing in disguise because this project may not have presented itself otherwise.

“To see these kids come to life while they’re creating, rather than having to do what they're told, is just beautiful,” said Boardman. “The students really dove into the process. They played various percussion instruments to see what would make their scene feel more realistic and chose various musical elements such as loud versus soft, long versus short, high versus low, and fast versus slow for the music to match the mood of the scene. As we near the completion I can see how the students have truly connected with the process of creating something bigger than themselves. We all had to work together, each of the students gave the project their unique touch, and now we have a silent movie that is completely and uniquely ours."

Boardman’s classroom became a movie set and the students were treated (and behaved) like professional musicians and performers.

“The students really took ownership of the project and are very proud of it,” said Boardman.

According to Boardman, the production of the silent film allowed her to teach the curriculum components of percussion, and the associated sounds that come from a scrape, shake, or hot. It also touched on the history of the 1920s. Students watched old Charlie Chaplain movies which then led into a jazz lesson and the history of jazz in the Charleston area. 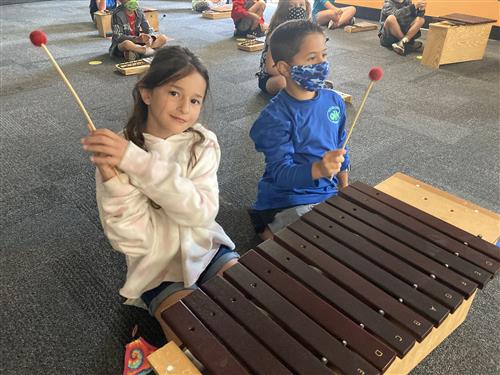 “This project and the music associated with it gave my students a chance to shine without the need for words,” said Boardman. 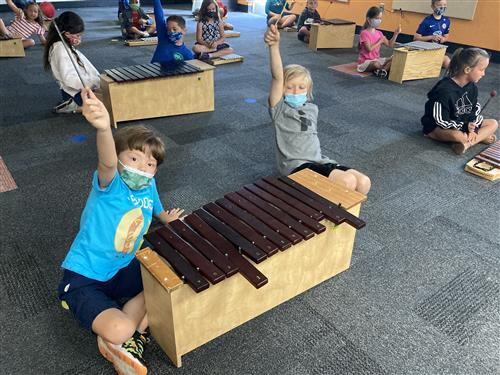 “Music in schools is so powerful and necessary,” said Boardman. “It gives students a safe space for innovation, creativity, and expression which are hugely important life skills to have when things get tough, like it was during this school year. My hope with the silent film project is for my students to feel that their voice and vision matter, even when so much is out of their control and even when they have masks on. Music has taught me how to be resilient, get creative, and make beauty out of struggle. I want to pass on that same message to my students."