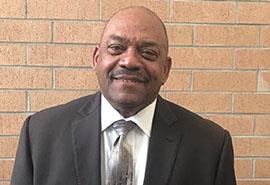 He replaces Vanessa Brown who has served the school since 2015. She was recently appointed as principal of the North Charleston Center for Advanced Studies.

Benton started his career at R.J. Reynolds High School in Winston-Salem, North Carolina teaching distributive education and business math. His next assignment was as assistant principal at Carver High School in the area where he served 1,500 ninth and tenth graders. Following these posts, Benton became the principal of Mount Zion Elementary School in Greensboro Public Schools for six years before becoming the principal of General Greene Science Magnet Elementary School where he implemented the school’s science magnet program. Benton served an additional four years at Mendenhall Middle School in Greensboro before joining Guilford County Schools as principal of Northeast High School and later Eastern High School. Benton spent one year as the Director of Student Services supervising the district ESOL program for Guilford County Schools and two years as Principal on Special Assignment working with new principals.

Benton joined CCSD in 2006 as the principal of Burke High School until 2011. He has since served as a CCSD Principal on Special Assignment.

For more information contact the Office of Strategy and Communications at (843) 937-6303.