Pulse of CCSD – Jerome Hagood a super star at Goodwin

We hear a lot about superstars in education. At W. B. Goodwin Elementary School, one of the real superstars is a man that is self-motivated, resilient in the face of adversity, and someone who takes ownership of his work. The school’s beloved day porter, Jerome Hagood, leaves everyone with a smile.

W.B. Goodwin Elementary School has about 500 students situated in three different buildings. It is a large campus to maintain, but Hagood does it with gratitude and pride. He will look over his work, and if he is not satisfied with the result, he will redo it until it meets his satisfaction.

“No words would ever be able to express how appreciative I am to have Mr. Hagood as part of our school team,” said Principal Natasha Jones. “No task is ever too big or small that he won't take on without a smile on his face. He's dependable, reliable, and always goes above and beyond to make sure Goodwin looks good.”

Hagood shows up every day with a positive attitude, no matter what the task, according to his colleagues. As the day porter in various CCSD schools for 18 years, 12 of those were spent at Goodwin Elementary.

“The people are friendly and I don’t want to work anywhere else,” said Hagood. “As an added bonus, the school is close enough so I can ride my bike every day to work.”

A typical day begins at 5:30 a.m. when Hagood prepares the cafeteria for the morning meal. There are various tasks throughout the building that must be attended to, as well as unanticipated clean-ups. Then it is back to the cafeteria to prep for lunch and cleans up after every child has eaten. 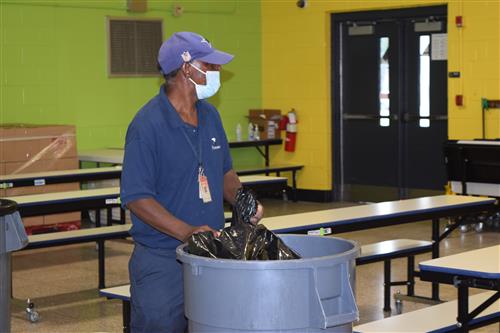 Ken Martin is the operations manager for Premiere, one of the building maintenance companies contracted to employ the district’s day porters. He’s only recently come on as Hagood’s supervisor describes him as a gentleman dedicated to his work and someone who takes pride in a job well done.

“He is well respected among his colleagues here at Goodwin and by all of us at Premiere,” said Martin. “We’re all proud to work alongside someone like Mr. Hagood.”

Last year because of COVID-19 lunches were eaten in the classrooms, which was an added challenge for any day porter. According to his colleagues, Hagood often took time with the students while cleaning up. One student, Jesus Hidalgo, described him as a nice person.

“He stops to ask how we are doing,” said Hidalgo. “He is a good person.”

When asked how he stays so positive, Hagood said, “I have nothing to complain about. I like my work.”

“He helped me on day one and I wasn’t even on the staff back then,” said Massenburg. “He helped set up the reading centers for Reading Partners without being asked.”

Hagood is a quiet, humble man that goes out of his way to do the best he can, no matter how big or small the job at hand. He was injured in a house fire at a very young age and learned early on how to overcome struggles and challenges.

“People have often said that we really have nothing to complain about when compared to Mr. Hagood, yet you will never hear him complain,” said Mary Stansell, the school’s Literacy Interventionist. “We could learn a lesson or two from him on how to treat others. He finishes his work, always with a smile, and takes the initiative to ask for more.”

“Mr. Hagood is considerate of the needs of others, he is dedicated to the overall condition of the school,” continued Stansell. “In his 60’s, his memory is sharp. He doesn’t keep lists, yet always remembers what it was that he was asked to do. Mr. Hagood will always keep his composure no matter what, and even manages a sense of humor to lighten the mood.”

“You can count on Mr. Hagood to do his very best,” added Jones. “He takes pride in his work. When he finishes for the day, he finds more to do. There are not many people like him. We are lucky to have him.”

Dana Coward, Goodwin’s assistant principal, has been at the school since Mr. Hagood’s first day on the job.

“He is our rock,” said Coward. “What would we do without him? He is rarely absent. We actually worry if he is not here. He adds so much to our school. He is good-natured and optimistic and such a pleasure to work with.”

Students love Hagood. He is friendly and engaging in the hallways with everyone. Co-worker Stephanie Parker said he is the sweetest person she knows.

“He helps me out, not sometimes, but all the time,” said Parker. “He is a hard-working man and I appreciate all that he does.”

When he is not at work, Mr. Hagood is at home working around the house to stay busy or playing with his dog. He comes from a large family of nine, five brothers and three sisters. Most of his siblings live out of town so they keep in touch by calling each other every day to catch up. He enjoys sports, basketball, and football, especially watching the Dallas Cowboys.

“If you come to our school, you can’t miss seeing Mr. Hagood,” said Stansell. “Whatever mood you might be in when you arrive, you are sure to leave with a smile!”

“Mr. Hagood has touched many lives in this school,” Coward added. “In fact, he’s touched all of them.”