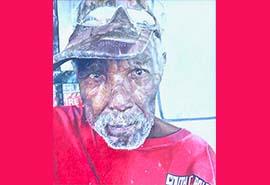 Charleston County School of the Arts (SOA) senior Enrique Boyd, won the 2021 Sixth District Congressional Art Competition, and his work will be displayed in the U.S. Capitol as part of a national art exhibition. Boyd’s piece is called “Cedric.”

“It’s an honor to win, and I was so surprised when I heard the news,” said Boyd. “I’m so excited to have my work displayed at the Capitol for a year!”

Each spring, the Congressional Institute sponsors a nationwide high school visual art competition to recognize and encourage artistic talent in the nation. Since the Artistic Discovery competition began in 1982, more than 650,000 high school students have participated.

"We, at Charleston County School of the Arts, are so proud of Enrique and who he has become as an artist,” said Principal Dr. Shannon Cook. “He has an ability to capture the subtle details of his subjects but also conveys emotion and a soulful kind of depth that makes his artwork captivating.”

Students submit entries to their representative’s office, and winning entries from each congressional district are chosen for display in Washington, D.C. in the Cannon Tunnel that connects the U.S. House of Representatives’ offices to the U.S. Capitol for the next year. Boyd and a guest will be invited to the Capitol for the unveiling and a reception at a later date. Two round-trip airline tickets will be provided, and Boyd will be eligible for an academic scholarship.

"In this unprecedented time, it is even more special to be able to recognize Enrique for his outstanding art,” added Barbara Richardson, Visual Arts teacher. “Even though he has been a virtual student since March of 2020, it has not affected his art. Enrique's use of colored pencils coupled with his photorealistic style has landed him numerous awards and scholarship offers. I am immensely proud of Enrique and I cannot wait to see what he is going to do at the Rhode Island School of Design!"

“This year’s art competition showcased the work of exceptionally talented young artists across the Sixth District. Among the unique and impressive entries, Enrique’s artwork rose to the top,” said Congressman Clyburn. “I commend him for his soulful drawing of a man who seems very relatable. Enrique’s work will represent the district well in the halls of Congress.”

“This piece depicts a man who was worth more to me that I realized, a man who was kind, just, and selfless,” said Boyd. “Cedric, also known as Ceco, is such an important part of me and my family’s lives. From being the first to alert us when my father had a life threatening accident to something as simple as helping me walk across busy streets, he has always been there for us. I’ve known Cedric as long as I can remember. When looking for a subject matter for this piece, I strived to depict someone that my mother holds in high regard, as she is someone that I admire greatly. The process of getting this shot was difficult, Cedric doesn’t like pictures of himself and always thought it wasn’t good enough. To me he is so unique and I just had to put it to paper.”

"Enrique's artwork is extraordinary,” said Denisse A. Santos, Visual and Performing Arts Coordinator. “I am thrilled for his accomplishment, and this wonderful honor for him and for the teachers who have worked with him at SOA. What an honor for CCSD to be represented nationally by Enrique's work!"